Effortless Distance With Your Golf Swing 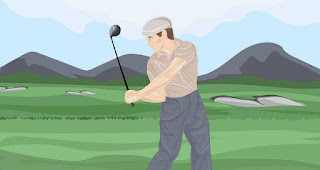 Many times when you hear people talking about getting the most distance out of their drives or irons, you probably hear the word timing used as they talk about how to achieve this. Or, when you watch the professionals play (especially in person) the distance they achieve seems to come so effortlessly and smooth.

Although a discussion of the entire golf swing isn't within the scope of this article, let's talk about the timing. Timing is a word that is often bantered about when discussing the golf swing and more precisely achieving maximum distance; but timing of what? And how do I achieve it?

In a nutshell, when is comes to getting the most efficient distance out of your golf shot, the timing element is the timing of the release of the stored energy that has amassed during the process of your golf swing.

Again, for the purposes of this article, let's fast forward just a bit to the point where you are at the top of your golf swing. At this point, if all has gone well, your left arm will be straight. The relationship between the club and your wrists will be 90 degrees (wrists will be cocked). Your hips will have rotated approximately 45 degrees away from their original address position, while your shoulders have rotated more toward a 90 degree rotation. Essentially, you are in somewhat of a "coiled" position at the top of your back swing.

At this position, you have accumulated your stored energy. Except additional energy that will be stored and released rapidly as your shaft flexes and un-flexes, this is what you have to work with.

Now that you have all this energy stored up, how and when to release it is the greater question. This power that you now possess is but a fleeting thing, and one must apply it at the proper moment in order to achieve the desired results.

Unfortunately, from this position at the top of the back swing is where the vast amount of golfers goes wrong; and that is the first movement they make back toward the ball is with the hands and arms. If you do this, a vast amount of your stored energy has now been released and not available to be applied to the golf ball. When you do this, you lose the angle created between your wrists and your club. You lose the angle that you have created between your shoulder and your hips. In essence, (among other things) you have begun uncoiling way to early.

Among other things, in its simplest form, this type of action is generally called swinging or releasing from the top or casting the club. Aside from grossly leaking energy from your swing this will cause and outside in swing path, and more often than not produce some severity of slice.

But, let's stay strictly within the confines of energy and timing. If, from the top of your swing, you begin the ascent of your golf swing toward the impact zone from the ground up and maintain the aforementioned angles we discussed much longer, you'll be well on your way to applying the energy of your swing at the proper moment (not to mention your swing path will be much more desirable).

From the top of your swing, the weight beginning to transfer from your back instep toward your front foot is what initiates the downswing. Not your hands, not your shoulders, not a spinning motion with your hips. As your weight begins to move toward your front side, your hips will follow by beginning to release (uncoil) from the angle they had attained at the top of the swing. As the hips begin to uncoil and continue to follow the weight shift your shoulders and arms will naturally follow. Note that I said naturally. You shouldn't be consciously firing your arms and shoulders to catch up. If you do, once again, you have just spent more of your stored energy.

As the weight shifts, the hips follow with rotation and the shoulders and arms now begin to follow suit, your wrists should still be in a "cocked" position in relationship to the club. In other words, this angle is still maintained.

As your left hip clears, this imparts a tremendous amount of pressure for your upper body to catch up. And catch up it will in a big way. With you hips cleared and your belly beginning to point down the target line, you shoulders will follow through the hitting zone and finally your arms and hands will be naturally force to release in a dramatic fashion through the impact zone. As all this happens the shaft of your club will have a pretty fair amount of flex imparted on it.

It is at this point, with the shaft flexed that the right hand begins to release (and eventually pronate) that is the culmination of releasing all this stored energy upon the golf ball with the proper timing.

In a sense, the release of the energy which entails the hips following the initiated weight shift, followed by the upper body responding to the hips uncoiling, that then begins to lead the arms and hands down the target line and through the hitting zone until finally the hands can no longer remain "cocked" and they release the club naturally as a result of rapidly catching up to the rest of what the body has done.

In summary it is the arms and hands that complete the release of your stored energy NOT initiate it from the top of your swing. As you begin to bring this concept together it may actually feel to you as though your arms and hand are "trailing" the rest of your swing. And in sense they are, they are waiting for the precise timing. And the great thing is, is that the physics of this will all take place quite naturally once you begin to refine the mechanics of your golf swing. And with some practice you'll soon be able to let the natural forces and physics of a good golf swing apply the proper timing to the golf ball in a smooth and effortless distance.
Golf Swing Basics Golf Tips