Showing posts from May, 2019
Show all

This week the PGA Tour is in Ohio for Jack’s tournament. The Memorial is played at the famous Muirfield Village Golf Club. Bryson DeChambeau is the defending champion as this year’s field is filled with star studded players. Tiger returns to action this year searching for his 82nd PGA Tour victory to tie Sam Sneads win record. In addition 7 of the top 10 players in the World Golf Rankings are playing this week including Justin Rose.  About the Course - Muirfield Village Golf Club was named after Muirfield, Scotland, where Jack Nicklaus won the first of his three Open Championship titles in 1966. Along with hosting the Memorial Tournament every year since its inception in 1976, Muirfield Village has also hosted several national championships and international team competitions, including the 1986 U.S. Junior Amateur, the 1987 Ryder Cup, the 1992 U.S. Amateur, the 1998 Solheim Cup and the 2013 Presidents Cup. Muirfield Village is the only venue to have hosted the Ryder Cup, the
Post a Comment
Read more

This week is the 74th US Women’s Open being played at The Country Club of Charleston. This is one of my favorite women’s events of the year because it has sectional qualifying that is played over 36 holes. You will often find many amateur players qualifying for the event. This year a local player qualified. Megan Furtney just graduated for St. Charles North High School and will be attending Duke University this fall. She finished in second place at the Elgin Country Club sectional site. I have spent a lot of time with Megan over the years watching her play and helping her out as needed when she was in middle school. It will be exciting to see her compete on the USGA’s biggest stage in women’s golf. The field consists of 156 players with a cut after 36 holes to the low 60 scorers and ties.  About the Course - The Country Club of Charleston was designed by Seth Raynor and opened for play in 1925. Known for its challenging green complexes and sweeping Lowcountry vistas, the co
Post a Comment
Read more

Kevin Na has been known to fight the mental demons that come with competitive golf such as “swing thoughts” and making big numbers including a 16 on a hole at the 2011 Texas Valero Open. He has bounced back over the last few years and this past weekend he found himself in the Winner’s Circle at the Charles Schwab Challenge.  The Stats That Count Na is often talked about how great of a short game player he is and how he is able to get up and down from anywhere. I do believe that he is a good short game player but I would have to argue that he is a better ball striker. He led the week in greens in regulation, proximity to the hole on approach shots, strokes gained approach to green and total strokes gained. He isn’t the longest hitter off the tee but he is able to hit fairways to help with his approach shots. His iron play was so good that he was ranked 2nd in strokes gained putting. Over all Na had a great week and it is always great to see players over come challeng
Post a Comment
Read more

3 Golf Drills To Improve Your Score

Skill Development Drills The fastest way to lowing your scoring average is to practice skill based drills. Skill based drills are drills that simulate as if you are playing golf. Each time you go to practice have a goal in mind for what you would like to achieve for that session. At the end of each session record your results for each drill. The goal is to improve from the previous practice session. Here are three skill based drills you can add to your practice routine.  Greg Baresel is recognized as one of the top up and coming teachers in the golf industry. Golf Digest has named him as a top teacher under 40 and one of the best teachers in Illinois. Greg presents world-class golf instruction and coaching videos that are designed to improve your game.
1 comment
Read more

The PGA Championship is always a special major for me. As a member of the PGA of America this is our opportunity to showcase our association and the great people that run the PGA. Typically the PGA Championship is played as the fourth and final major of the year but has been moved up in the season to accommodate the PGA Tour schedule. When the final putt of the tournament was hit it was Brooks Koepka once again that showed his major dominance. He has now won the last two PGA Championships in addition to the last two US Opens. Brooks doesn’t look to be slowing down even after a “rough” final round back 9. In the end he was able to outlast Dustin Johnson and win by 2 shots. Bethpage Black showed its true character in more ways than one. Through-out the week there was a lot of talk about the course, the fans, the concessions, and the 2024 Ryder Cup but the golf course did not disappoint. Brooks Koepka is on top of the golf world and no one is even close to catching him when it c
Post a Comment
Read more

Instructors and launch monitor experts are promising golfers extra yards if they can execute an angle of attack (AoA) that is positive, or up at impact. I believe that hitting up on the driver can benefit most club players. Launch monitors like Trackman and Flightscope have been very valuable tools in my teaching, and one of the things that they’ve shown me is just how much golfers hit down on the ball with their drivers. Some are more down with their drivers than with their 7 irons! So what are the benefits of hitting up on the ball with the driver? Solid contact is one, and hitting it farther is another. When golfers hit down on the ball with a driver, a few things can happen: Contact can be too high on the face (where there is more loft on the club), which will result in slower ball speeds and shots that actually launch too high. If contact is in the middle or on the bottom of the face, the launch will be too low, which it will cost golfers carry yards. So what
Post a Comment
Read more

You can’t watch a weekend of golf without hearing talk about stats and specifically strokes gained. If you are unfamiliar with the strokes gained stats it is okay. I will try to provide a simple explanation to help. It simply looks at the players in the field for that day or tournament and how a player is playing relative to the field. For example is the field average score is 3.5 on hole 4 and a player scores a 3 they gained a half of a shot on the field. Can this help us as everyday golfers? That question is stay out for debate but I do believe stats can help us with identifying key areas of your game and to help with managing expectations.  This week we are going to take a look at driving and the importance of fairways hit. Distance is really dominating the game. Does hitting the fairway not matter anymore? It depends… It depends on how far you hit. Each week the winners on Tour tend to be long and straight! I know shocking! To help with the debate I have added a chart for Gol
1 comment
Read more 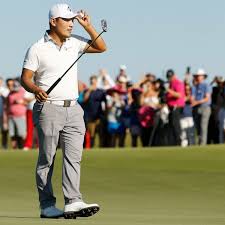 This past week the PGA Tour was at the AT&T Byron Nelson Championship at Trinity Forest Golf Club in Dallas, Texas. The field had some pretty big names in it including former NFL quarterback Tony Romo. Romo has some serious golf game but it didn’t show this past week. Brooks Koepka was the heavy favorite heading into the week. In the end Sung Kang put together a stretch of holes that included 3 birdies in a row on 14, 15 and 16 in the final round to finish with a final round 67 (-4) and win by 2. Kang missed the cut in his past two events but he does have a few top 10’s to add to his resume this season. I think Sung Kang has a bright future on the PGA Tour. He is aggressive and his go for it swing tells you that he will give himself as many opportunities to score as he can. Congratulations to Sung Kang on the his first PGA Tour victory! The Stats That Count When looking at Kang’s stats for the week there were a few that stood out to me. The first stat is he did
Post a Comment
Read more

Putting is often a stat that is tracked on scorecards, but it doesn’t always tell us how our putting is. If you make a 3 foot putt it counts the same as making a 15 foot putt. In addition if you 3 putt from 40 feet you may view it as a negative but in reality you are going to have 3 foots from 40 feet due to the length of the first putt. If you are going to record the number of putts on your card I would add one more valuable stat to help with short game. That stat is the distance of your first putt. For example if you chip on to the green and you leave yourself with a 10 foot putt and two putt I would see this as a poor chip instead of not making a one putt. Your putts per round with improve as you improve your proximity to the hole on approach shots and short game shots. The chart below shows how quickly you can improve your putting by getting your first putt closer to the hole.  Greg Baresel is recognized as one of the top up and coming teachers in the golf
Post a Comment
Read more

When you are playing the great game of golf, your golf scores become both your best friends as well as your worst enemies.  Many players live by their golf scores and judge their progress according to what the score card says.  While you might think that your golf scores are the best gauge of how you are coming along as a golfer, that isnít necessarily the case. The way golf scores are tallied can mean so many things.  Just because you shoot an 8 on a par 4 doesn't necessarily mean you are a bad golfer.  It might mean that you had a bad drive and a mis-aimed chip, but it doesn't make you a bad golfer.  So don't put too much stock into what the scorecard says.  Judge your golf game by how you play rather than what your scores are. Golf scores are only meant to help you keep track of the strokes you take to get from tee box to the hole.  They don't ever take into consideration things like hazards, weather conditions, or anxiety.  Sure, you can't keep track of ho
Post a Comment
Read more
More posts